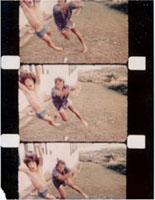 The "images" are enlarged color photographs taken from Jonas Mekas¹ original films. Each image contains between 2-4 frames & you can often see subtle movements as you look up or down the frozen film frame. Jonas Mekas is a filmmaker not a photographer, which adds a special dimension to his decisions about which frames to choose. These images possess the stillness of photography as well as the motion of film. This show is only possible because Jonas Mekas realized the aesthetic and ethical priority of his film diary over any feature film project he might undertake.

We are offering two prints from this series, courtesy of James Fuentes Gallery.